As she crawled into bed on December 7, 2005, Christine Olson was unaware that her daughter, Tiffiany, lay lifeless at the county medical examiner’s office. The phone rang around 11:20 p.m. "Mom, there’s been an accident; get to Manatee Memorial Hospital." It was her 29-year-old son Derek, and he had received a call from a friend saying there had been a motorcycle accident in Palmetto. They were given no other information.

As she raced to the hospital, Christine refused to believe anything could have happened to her precious 22-year-old Tiffiany. No one at the hospital knew anything. Frantically, Christine and Derek checked every local hospital. Nothing. Finally, a hospital security guard contacted the local police. At 1:30 a.m., a police officer arrived in the parking lot of Manatee Memorial Hospital. He held an evidence bag containing Tiffiany’s watch, lip-gloss, her broken earring and toe ring. "I’m sorry, but your daughter is gone." When Christine asked where Tiffiany was, she was told, "Probably at the morgue, but they’re closed for the night. Call them in the morning." 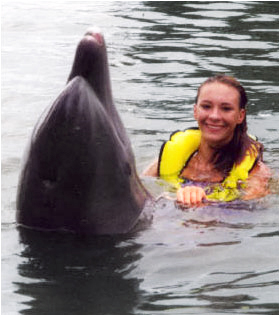 Tiffiany and her boyfriend Dustin were northbound on U.S. Highway 19 when a car traveling westbound pulled in front of them. Tiffiany died instantly; Dustin died approximately half an hour later. Tiffiany’s driver’s license did not have her current address, so the police had no way to contact the next of kin.

"No mother should have to learn that her child died six and a half hours after the fact." Christine knew something had to change. Visiting the accident site the next day, Christine searched the area replaying horrifying events. According to the National Association of Emergency Medicine, nationally, the average time it takes to notify the next of kin is 6 hours and sometimes it takes up to a day.

With the assistance of State Representative Bill Galvano, the Florida Department of Highway Safety and Motor Vehicles, and law enforcement agencies, Christine designed a program to help notify families in case of an emergency in memory of her daughter, Tiffiany Olson. TIFF's Initiative (To Inform Families First) is a voluntary program where Florida residents access a database where they enter emergency contact information. The information entered into this secure database is only accessible by law enforcement through a Florida driver’s license or identification card. When police officer enters a driver’s license number into their computer, the contact information will appear on their screen.

TIFF's Initiative went into effect on October 2, 2006. As of As of 2018, over 13 million Florida families have registered and added their emergency contacts to drivers licenses and I.D. Cards

Currently, TIFF's Initiative is available in several states and Christine would like to see this program established throughout the whole of the United States. Several other states are currently working to get a similar program implemented.

TIFF's Initiative gives Christine hope that other families will not have to go through what she did that evening. Every day it haunts Christine to wonder, did Tiffiany suffer? Did she cry out for her mother? "I cannot change what happened that evening," she said. "But because of my belief in the Lord and knowing Tiff believed as well, I have complete faith I will see her again."